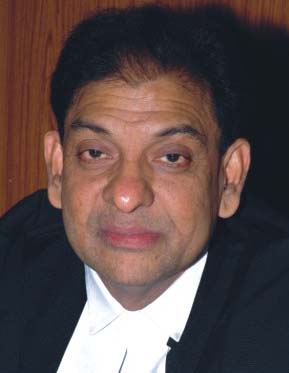 FAMILY HISTORY Native of Chintalapalem near Visakhapatnam Family profession is Ayurvedyam and Agriculture.

Forefather was a Chief Commander of Royal Army and His Great Grandfathers are Asthana Raja Vydyulu of Vizianagaram Royal Family of Andhra Pradesh.

His wife Smt. Lakshmi was an advocate. She has given up her 10 years of active practice on moral ground that being wife of District and Sessions Judge she should not continue in legal practice. Presently she is working as Lady Member in Consumer Forum-I, Hyderabad District, a Government service.

EDUCATION Mr. M.E.N.Patrudu graduated from Mrs. AVN College, Visakhapatnam and obtained the Law degree from Andhra University, Visakhapatnam. He was never detained in any class throughout his educational career. A sportsman. He was elected as President, Law College, Andhra University and conducted number of seminars and symposiums. Few to name, Indian Ocean as Zone of Place, Legal education and the society. He was also President of Rotaract Club of Waltaire and presened RYLA Youth Leadership Award (International Award) by U.S.A. He was Chairman of Youth Hostel Association of India, A.P. State, Visakhapatnam Branch and has undertaken various youth leadership programmes.

LEGAL PRACTICE Mr. Patrudu and his wife have started their profession at Visakhapatnam District Court in 1976.

LAW TEACHER While practicing as a lawyer, he was a part-time lecturer, teaching Civil Procedure Code, Criminal Procedure Code and the Evidence Act in Nyaya Vidya Parishad evening College.

PUBLIC PROSECUTOR He was appointed as Public Prosecutor of the Principal District Court, Visakhapatnam in 1984 and was the youngest Public Prosecutor ever appointed in the State of Andhra Pradesh and recognized as honest hardworking and intelligent prosecutor.

POSTINGS 1st appointment as 1st Additional District and Sessions Judge, Krishna District the same day his wife has given up her practice, Special Judge for Essential Commodities Act at Hyderabad.

Principal District & Sessions Judge at Mahbubnagar, and at Srikakulam.

District Judge, Warangal and his 3 years tenure is a history. He has introduced Jail Adalat, Grama Adalat and Pratidin Lok Adalat and for the first time in the country. He has carried the justice to the doorsteps of the people in the villages. He has gone into the interior villages, affected with extremist’s problems in order to create legal awareness in the people. The Star T.V – Zee TV – NDTV has covered his programmes. His slogan “Your Problem – My Solution” has received the hearts of poor and innocent. The Jail Adalat in Central Prison on every Friday has received appreciation from the then Union Home Minister

Total transparency was maintained and the honesty, hard work was recognized.

A founder Director of Prosecutions in the State of Andhra Pradesh and was the youngest Director of Prosecutions at the National Level. While working as Director of Prosecutions, he was made Ex-officio Secretary (Home) Government of A.P. He has introduced many innovative procedures making the prosecutors accountable for every act of prosecution and the department of prosecution to act as liaison between judiciary and Police. Prosecutors used to submit monthly statements. He made the prosecutor to file written arguments and submit case diary to court. Drafting of chargesheet and submit them to the court and numbering the charge sheets has become the responsibility of prosecutors. Opposing the bail by filing written memos with case diary and remand report was made mandatory. He has visited almost all Criminal Courts (Magistrate Courts) in the State and used to sit in the Court for long time to observe the performance of prosecutors and have close interactions with Superintendents of Police and with the District Collectors with the Station House Officers and the Judicial Officers at each place.

Posting of cases before each Criminal Court as of one police station on one day was introduced by him and production of witnesses and accused without fail have yielded great results in disposal of criminal cases. The Judicial Magistrate used to send monthly confidential report about the performance of the prosecutor before his Court. Detailed check on the prosecutions was made practicable.

ACADEMIC He is an expert in court management, case management, time management, work management and man management in judiciary and his Book in the Subordinate Judiciary titled as Judicial Guidance and Judicial Governance on table. Docket Explosion – reasons and remedies and Legal Literacy and society apart from topics on management.

He is a regular Guest Faculty to National Police Academy (N.P.A.) A.P. Police Academy, A.P. Judicial Academy and Lal Bahadur Sastry Academy at Mussorie and other premier training institutions in the country. He attended many International, National and State Level Seminars, Symposiums particularly on A.D.R. mechanism.

REGISTRAR – HIGH COURT OF A.P. As Registrar (Management) he has taken all necessary steps in implementation of Supreme Court directions for providing the amenities to the judicial officers and he was in-charge of the work and conduct of subordinate courts. The disposal of cases has increased during this period. As Registrar Vigilance he has created an atmosphere of work culture and clean conduct and officers are made accountable for misconduct. Many judicial officers of questionable character have faced disciplinary actions.

LEGAL SERVICES AUTHORITY As Member Secretary, A.P. State Legal Services Authority. Para legal volunteers in every village and making one village in each taluk as litigation free village forever is a tremendous service. E-Justice programmes are designed . Special Lok Adalats are being organized.