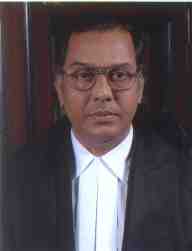 He is the grand son of Grandhi Venkata Reddy Naidu, Former Minister for Law, Courts, Prisons and Endowments in the first Cabinet of State of Andhra Pradesh and son of Grandhi Kesava Rama Murthy, a leading Advocate for 54 years at Narasapur, West Godavari, District.

He was born on 09-04-1951 and had his education at Narasapur, Andhra Loyola College, Vijayawada and Andhra University, Waltair. He won the Andhra University Law College Decennial Celebration Prize in 1969 for securing the highest number of marks.

He was enrolled as Advocate on 10-04-1972 and practised at Narasapur. He joined the State Judicial Service as a direct recruit District Munsif on 16-08-1976. He worked as Munsif Magistrate at Chirala, Razole, Repalle, Amalapuram, Sirpur and Hyderabad.

He was promoted as a Subordinate Judge on 22-02-1986 and worked at Suryapet and Hyderabad. He was Assistant Director, Law, A.P. Police Academy for two years.

On promotion as District Judge on 13-03-1992, he worked as Additional Chief Judge, City Civil Court-cum-II Additional Special Judge for SPE and ACB Cases, Hyderabad. He was Additional Director, A.P.Judicial Academy for three and half years and Law Secretary to the State Government for five and half years. He worked as Principal District and Sessions Judge, Chittoor for three years and then as Metropolitan Sessions Judge, Hyderabad and Member Secretary, A.P.State Legal Services Authority. He worked as Registrar General, High Court of Andhra Pradesh from 26-05-2005. He was a Super-time Scale District Judge.

He participated in a six week programme on Gender and Law at the University of Warwick, United Kingdom in 1996 on being nominated by the Supreme Court. He also participated in the International Visitor Programme on U.S.Judiciary and Rule of Law in 1998 on the invitation of the U.S.A. Government. He participated in a Thirty-Four Country International Conference on Legal Systems and Reforms Organised by the University of California at Berkely in June, 1998. He delivered a public lecture on “Building Legal Systems in Newly Emerging Nations: Focus on Andhra Pradesh State in India” at Cleveland State University, Ohio, U.S.A. in an event co-sponsored by Cleveland-Marshall College of Law, Maxine Goodman Levin College of Urban Affairs and Nance College of Business Administration, on 04-05-2006. He was one of the founder members of the National Academy of Legal Studies & Research University, Hyderabad and Regional Centre of ICADR at Hyderabad. He was involved in drafting about 250 State Legislations as Law Secretary. He was Guest Faculty for various training programmes at Andhra Pradesh Judicial Academy, Dr. MCR HRD Institute, A.P. Police Academy and S.V.P. National Police Academy, Hyderabad. He retired on attaining the age of Superannuation on the afternoon of 08-04-2013. He was a Member of the Executive Council and General Council of Damodaram Sanjivayya National Law University, Visakhapatnam. He is a Life Member of Indian Council of Arbitration (ICA), New Delhi and the International Centre for Alternative Dispute Resolution (ICADR), New Delhi and is in the Panels of Arbitrators of ICA and ICADR. He was also the Chairman of the Institutional Ethics Committee of FACTS (Fraternity of Advanced Cardiovascular Techniques and Solutions) Foundation, Hyderabad. He is designated as a Senior Advocate by the Hon’ble Supreme Court of India with effect from 03-09-2013.

He is appointed as the Chairman of the Andhra Pradesh State Electricity Regulatory Commission with effect from 11-10-2014.